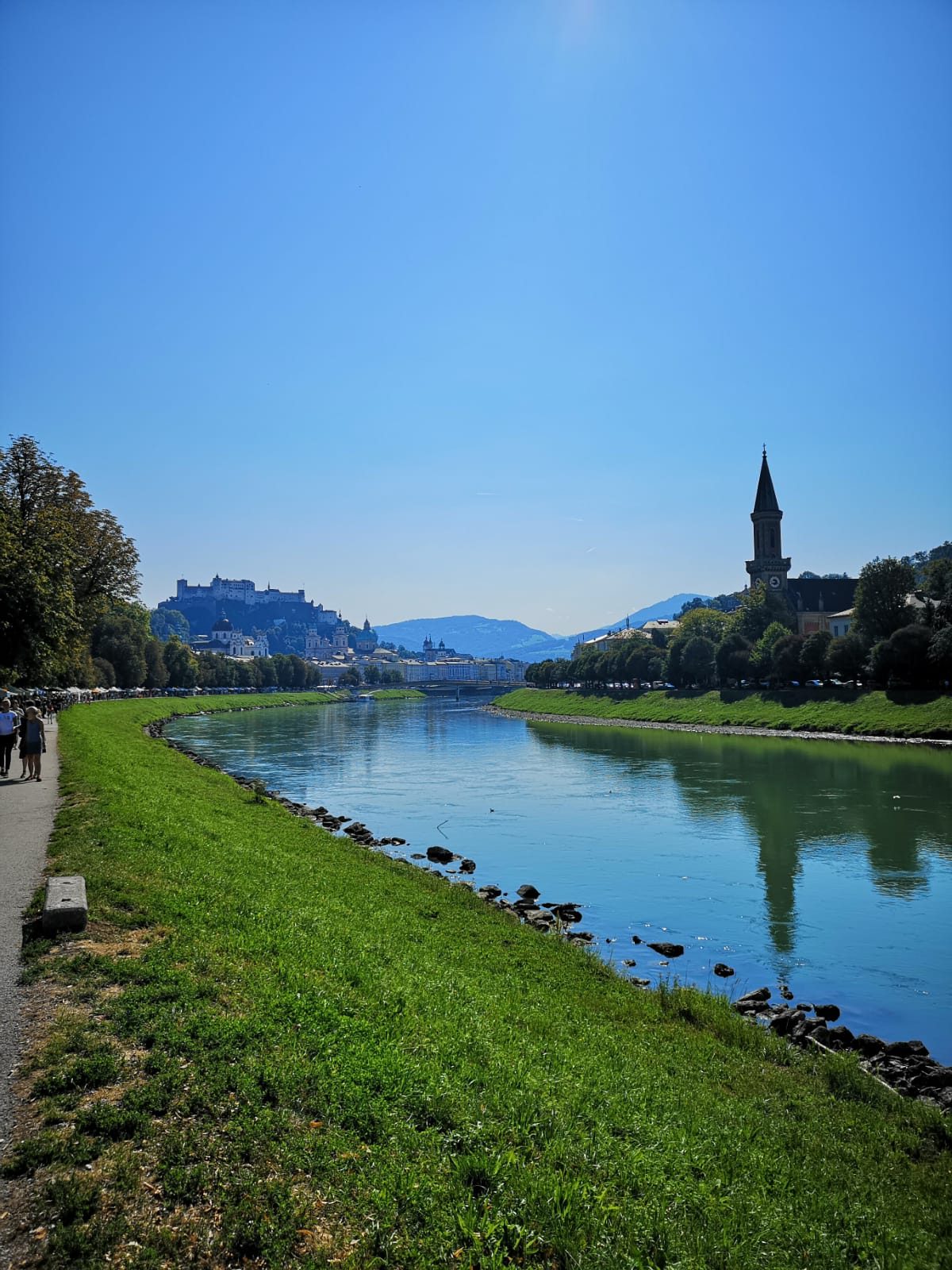 The T-shirts had been printed, the itinerary emailed, the goodie bags made and somehow we’d managed to keep the whole thing a secret for 8 months, with 18 loud mouth hens it was pretty impressive.

A weekend of sophisticated debauchery, including afternoon tea, bike rides and absolutely beautiful scenery. Salzburg or Austria has never been a destination that is has appealed to me, mainly because I didn’t know much about it, but as it was the home of the Sound of Music is was the perfect place to celebrate Polly’s hen (she’s obsessed). It would be blasphemous not to mention it is also the birthplace of Mozart if that grates your cheese.

With the most comprehensive itinerary I have ever laid eyes on, I have to say the credit for this blog should really go to the maid of honour, Jennifer Juneman, without her we’d probably still be wandering in the wrong direction trying to decide where to stop for a beer.

Afternoon tea at cafe Sacher was an absolute delight. The setting was just bloody lovely and they obviously thought we were so sophisticated to go to Salzburg on a hen do, that we were lucky enough to bag a private dining room, with double doors that opened out onto the river…. no you’re extra. It was expensive and I would possibly say you’re paying for the luxe of it all, as I wasn’t over the moon blown away by the afternoon tea, but it was a wonderful experience. If you’re not up for the full shebang, pop in for a coffee and pastry on a G&T.

Salzburg’s Largest Beer Garden If you think you’ve been to a big beer garden get yaself down to this place. It really is hard to describe what this place is like, you walk into to a really big building with lots of steps and buffet stalls and a massive hall and then you reach this vast beer garden. You queue up and then pay for your stein (I of course went for the 1l stein) and then these big burly men fill up your stein straight from the barrel (or whatever it’s called) and slide it over to you like you’re in some sort of movie. You sit on long tables and the atmosphere is electric and then when the light of day dims the place is lit up by massive fairy lights. Now if that’s not a bit of me I don’t know what it.

Petersfriedhof cemetery in the old part of the city is definitely worth a visit. Morbid? Yes, but also so ornate. Thought provoking and a really interesting to see other countries traditions surrounding mourning our loved ones.

The look on our Princess Polly’s face when she found out where she was going and us all singing “how do you solve a problem like Polly” in her face. Obviously it would be slightly weird if you recreated that especially if your just going on a weekend break with your significant other.

Flying into Salzburg and seeing the lush green mountains. It was pretty magical and because I always feel emotional at everything, I of course felt emotional. The views in general were just absolutely breathtaking and i’d recommend a visit on that alone.

The sound of music bike ride. Covering 8 miles and lasting 4 Hours (although ours was about 5-6 hours because we were having such a ball).  Read as we were slow bike riders, enjoyed wandering around too much and not doing what we were told and stopped frequently to go for a wee or have a swig of gin. It was a steal at €35, which works out about €5.50 per hour of fun. http://www.mariasbicycletours.com/sound_of_music.html

Opening the patio doors at Cafe Sacher and seeing the river and the breathtaking views…… then proceeding to take 86,372 photos on the balcony.

The pastries are to die for and if you scout out independent bakeries you can save some pennies, that’s if you can resist buying 154 pastries. The selection is unreal and I ate this ham, cheese pastry thing and honestly I’m still thinking about it to this day, it really affected me.

Schnitzel – I of course had to google how to spell that. pounded meat, covered in bread crumbs and then deep fried, mic drop. Add in some buttery boiled potatoes that look shit, but actually taste amazing and you’ve got a match made in heaven.

We ate at some lovely places, which I’d definitely recommend:

Barenwirt, situated on the river with an outdoor terrace, which was compact but adorable. It’s also only a 5 minute walk from the beer garden… ideal. I of course ate the very traditional cheesy pasta, washed down with a beer though so I kept it on brand.

Cafe Tomaselli based in the heart of the old city and overlooking the square. We managed to nab a table (well 4 as there were so many of us) on the roof terrace. The sun was shining, we were all smiling and they did the cheesiest omelettes, best iced coffees and mouth watering cakes that were wafted past your nose by an elegant waitress every 54 seconds.

Beer, of course. Now I know I love a tipple, but spoiler alert…. I’m not that into beer, however the light crisp taste of Austrian beer was the perfect accompaniment to sunshine and strudel. I’ve obviously not drunk it since but when in Rome and what not.

Take lots of dollar, well euros to be precise. We ate at rather lovely, but expensive places and you are charged for every single extra item. want some butter on your roll? 1euro. Mayo with your chips? 2 euro. Tap water? 1 Euro. so yeh, you get the gist, there are lots of hidden charges.

If you can get to the top of the hill (not sure if that’s what it is, small mountain maybe? but it’ll do until someone corrects me) the views are bloody fantastic. This was just outside the abbey, where actual Sound of Music was filmed.

Flights were very reasonable at about £135 return and I was so enamoured by the place that as soon as I came home I looked up flights for mum and I to visit and they were coming up at steal for as low as £80 return, now that’s a bit of me.

We stayed in 2 massive and central Air BnB’s which slept 12 people each and worked out about £115 for 2 nights, which you can’t grumble at. We stayed here but assuming you’re not going to be heading off with 11 mates Air BnB have an a cute little selection of well priced bolt holes.

I’m not going to say that the people of Salzburg are rude, I’m just going to say I don’t think they have many hen do’s frequent their city and they struggled with it all. Having to house 16 people for brunch or serve drinks to 16 people seemed like farrrrr to much trouble for their liking.

On that note, believe it or not Salzburg isn’t very clubby, you all very much believe me don’t you. There are some very classy wine bars and cocktail bars, which are obviously a bit of me but not really anywhere to stumble into at the end of the night when your 14 G&T’s down, you’ve got sambuca down your playsuit and your make-up isn’t looking so fresh. I VERY much enjoyed myself at the club, but potentially was the only club in Salzburg and possibly the whole of Austria considering how rammed it was.

All in all it was the most perfect hen do and weekend getaway and I’d recommend it to anyone. Now here’s some photos to make you jealous.

Photos are probably a selection from all 16 hens, I probably didn’t take any of them, so all credit to each and every one of them for their photography skills being 86% better than mine.

Adele, London and All …