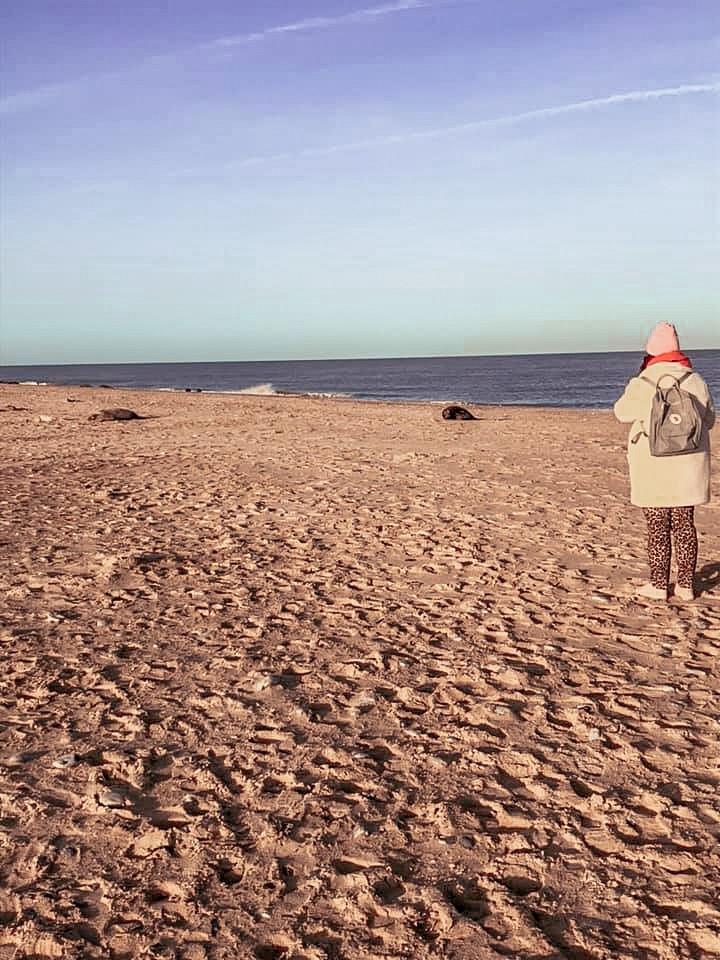 Isn’t it funny that when you reach adult stage the prospect of a walk is bloody wonderful? As a child when the dreaded words were uttered “shall we go for a nice walk” it was met with moans and groans and every single excuse under the sun and don’t get me wrong I still don’t jump for joy going for a walk to the shops, but a walk exploring a wonderful new place in Norfolk or Suffolk or anywhere else actually is rather thrilling.

The week before Christmas one of my wonderful friends Lizzy and I decided to wrap up ourselves up warm, do the same with the kids (her’s not mine) and trundle along to Winterton. The kids were reluctant with the ‘walk’ part and what can I say, I feel them.

For those that don’t know Winterton-On-Sea on the Norfolk coast is the perfect place to visit between late October and early February to catch a glimpse of the seal pups in all their glory. You can of course go all year round but you the silky little buggers won’t be as cute.

We parked at Winterton, if you follow the windy roads it will lead you to the beach road and you can usually find a little parking spot on the roadside by the dunes, alternatively there is a car park, but you have to pay.

Our plan was to walk along the beach to Horsey, which takes about 30 minutes and usually that’s where all the seals are, but much to the kids delight (and mine) the seals had lolliped all the way to Winterton, so not much walking was required.

There were quite literally hundreds of Norfolk seals and their pups, which had made their way up into the dunes and all along the beach, which made the walk rather tricky at best, considering I have the attention span of a gnat and am as clumsy as Mr Blobby. Many a time I almost come face to face with a seal and had to retreat into the dunes at a hasty pace. It was a wonder to see and they are so cute I wanted to snuggle beside this little lad for the rest of my life.

We bumped into a few of the “seal wardens” and although some are jobsworths, the one we met who was on duty was about 138 and the cutest man ever. He let us all have a nosey through his binoculars which Lilah in particular did not want to give back. He was also so informative and because I’m a bit of a nerd I wanted him to tell me everything out our sealy friends to how long the mother is pregnant to “are they really as silky as they look?”

It was a wonderful few hours, ambling, taking pictures and running up and down the sand dunes. Okay, Lizzy and I run up and down the big dune once, Evan and Lilah did it properly and frequently. The dog had a ball and it felt good to blow the cobwebs away.

We were thrilled at the prospect of a hot chocolate to warm our souls on our return to the beachside cafe at Winterton, which was of course closed – they are open in seal season at weekends though. All was not lost though as the hot chocolate served at chez Lizzy was just as delicious and I got marshmallows. It doesn’t take much to make me happy.

So if you’re at a loose end in Norfolk this weekend amble down to Winterton and get seal searching.

Thailand brought me and …

Dressing For a Summer …