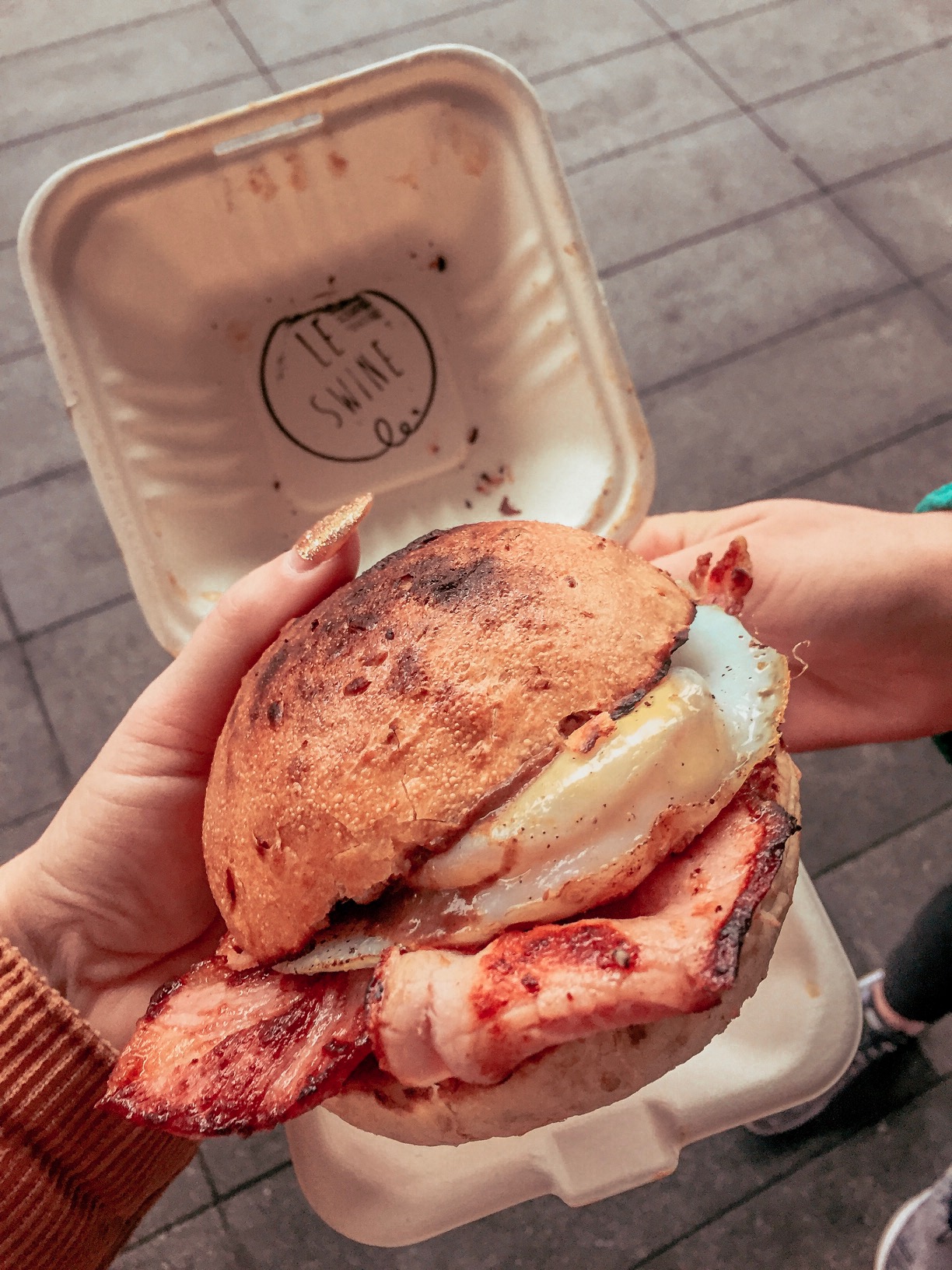 You all know that I am food obsessed as are most of my pals and especially my dear friend Josie (best known for featuring in blog posts such as Adele, London and all things lovely and gal pals). She also has an obscene addiction to all thing cheese, meat (even though she claims she’s a veggie) and street food.

The plan was a day trip to London, visiting the best street food sites and stalls and downing a few ciders on the way just to make sure we were keeping hydrated. We basically wanted to experience all of the places we’d been drooling over on Instagram for the past year.

About a month before the big trip, Josie had a mild breakdown declaring she was worried that we couldn’t possibly fit everything in and maybe we needed to stay over night. I shared her fears and we frantically tried to make it work but it was a logistical nightmare, so we decided to stick to 1 day and hit it hard.

We came up with some tactics which involved sharing where possible… this was a big thing for Josie, but I sold it to her that we would be able to try more things so she agreed. We also decided not to waste stomach space on empty calories, therefore chips were off the menu, which was A OK with me, because I can get chips any day of the week. We also agreed on shoving a few Tupperware in our bags, which you may laugh at, but is there anything worse than waking up with regret that you threw away that last slice of pizza? I rest my case.

Josie came over a week before so we could make a plan, secure a route and list the must have items that we had to indulge in. After intense review we decided on a breakfast spot (Spitalfields Market), a mid-morning snack spot (Borough Market), a lunch spot (Giant Robot), a late lunch spot (Winterville) and a dinner spot (Dinerama). We later realised that our didn’t actually get into London until 11:40am, but we thought we would just roll with it and eat as much as we could.

So here goes….. where we ate, what we ate and most importantly, what we thought!

A delectable bacon butty, served with an rich, fried duck egg, bacon butter (yes you heard right) and mushroom mayo, all served in a toasted milk bun, which was sweet and light and bloody amazing. I could not get enough of this, there were moans and groans that wouldn’t be out of place in the bedroom and each time you took a bit you got a different mix of the compontents.

Ash – 8.5/10 would have been higher if the yolk was slightly runnier.

Jose –  9/10 she also added cheese which I was really jealous of.

Next we headed to Borough Market and although we wandered around for quite some time were fairly disappointed with our ‘snack’ choices. The main stalls looked great with a wide variety of cuisines on offer and the baked goods looked to die for, but I have to say looked better than they tasted. We shared a cheese pretzel and a cheese twist which were both average at best. The star of the show was a halloumi stick from ‘The Turkish Deli’ wrapped in mint and filo pastry and deep fried….. now that was a bit of us.

I really wanted to buy some cannoli here or a massive pastry but didn’t see anything that really whet my whistle.

Next stop was Giant Robot, a bar/street food rooftopia (that’s what it says on the website) situated in Canary Wharf. Alongside all the calorific stuff, there is also a wonderful botanical garden, with little seating areas and pianos (well 1 piano) so it is definitely worth a wander if you are heading that way.

I had the fish taco – crispy fish, green chilli, coriander and lime sambal, lettuce & mayo. I asked for the chillies to be left off as they sounded far to spicy for my delicate taste buds, but without them I think the bun tasted bland.

Jose went for the free range fried chicken, special sauce, lettuce & chilli pickles and she was keen. They were bitesize so I didn’t get to try any but she said the chilli wasn’t too hot that just made me even more moody.

A modest score and would have potentially been higher if I’d had left the order as is, however I would say the bao buns at Norwich market were more delicious.

I’m big on burgers so although we were full a little burger slider was a must. I went for a bacon slider and Josie went plain. I was disappointed, the patty was ever so salty and there was no ooze on the burger and is there any point having a burger if there’s no ooze. I also have a massive thing about sauce and although it wasn’t mentioned on the menu it had tomato sauce in it, which I have an extreme dislike for, so I had to eat round the sauce, not ideal.

Definitely won’t be rushing back for one of their burgers any time soon.

After filling ourselves up with even more food and a few double G&T’s the only wise thing to do was to move on. We headed to Winterville at Clapham Common, where we knew we really were in store for some amazing food that we’d been lusting over for months.

Picture the scene perfectly pink steak in a soft baguette, with caramelised onions, a melted cheese sauce drizzled over the top and a thick, flavoursome, salty gravy to dip the baguette into…… No, you’re drooling!

It was pretty much perfect, the only thing that would make it better, would be more cheese, obviously, but when in the world is there ever enough cheese?

We also had mouth watering shin nuggets, so low and slowly cooked that they just fell apart, Jose gave a 10/10 to these bad boys and said they were the highlight of her day.

There’s no picture of the steak baguette because I inhaled it in about 4 seconds and taking a picture was the last thing on my mind.

We’ve been following this stall for a while and the idea of warm bubbly melted cheese being scraped onto food was quite frankly sending is into a frenzy. We even joked about taking food from over stall over and asking for them to top it with raclette….. we of course didn’t do that because I’m awkward and never dare ask such a thing.

The cheese of course tasted insane and I loved the potatoes and the red onion. The beef wasn’t for me (that was Josie’s choice anyway) and I just wished there were more options other than the potatoes, (even though they were so delightfully garlicky and buttery) I don’t really know what, but that’s just how I felt ok?

Two brothers who have travelled around the world picking up flavour combinations to blow you away and boy did these halloumi fries blow me away.

Deep fried halloumi drizzled in garlic yoghurt and honey, spiced up with za’atar and then sprinkled with pomegranate and mint. Every mouthful was a new taste sensation and I will happily stay single my whole life if I could eat these every day instead.

Ps. They also have the most amazing names for their kebabs like ‘Tikka Turner’ and ‘Nigel Fromage’

Their aim is to elevate the humble vegetarian dish and boy did they succeed. The Aubergine was deep fried in a walnut batter, pomegranate syrup and whipped feta they were nice and light and all in all blooming lovely.

So to sum up, if you’re looking to eat some banging street food head to Up in My Grill, Le Swine, Babek Brothers, Raclette Brothers and Root and Coal. Have you eaten any street food recently that you’ve loved and I’ve missed? Let me know in the comments or come and chat over on my socials.

Mourning the Old Me